Bentley delivered 5 units of its ultra-exclusive and one-of-a-kind Mulsanne Grand Limousine by Mulliner to the UAE in 2015. However, no one took possession. Now, Bentley is offering buyers wherever in the world one more option to purchase what they believe to be significant pieces of automotive history.

Mulsanne Grand Limousine was manufactured as a private order in the beginning. Mulliner was permitted to develop 5 more samples, that were then transported to the UAE where they have remained for the past 6 years. Bentley may have assumed that revenues in the oil-rich country would be guaranteed, but the scheme failed because the super-luxury cars were never driven or licensed.

Perhaps this time they'll pique the interest of a few billionaires who prefer the feel of an old-school coach-built Mulsanne with a 1,000mm (39.4 in.) extend and 79mm (3.1 in.) extra headroom. So, for the unspecified amount of money that a Mulliner Mulsanne Grand Limousine demands, what do you get? To begin with, the limo has a bespoke temperature control system with two zones that enables each of the four back passengers to independently manage their own micro-climates.

There's a face-to-face seating configuration, which is crucial for multi-million dollar deals on wheels. You also get a bottle cooler with crystal flutes, a beverage cabinet with custom-made crystal tumblers, the finest varnished folding picnic tables for working while traveling, and iPad docking and charging systems.

All of this may be savored while being encased in the finest leather and wood that a car has to offer. There's an intercom service that lets you tell Parker which route they missed, and between the front and back seats is "smart glass." It's the first Bentley with a function that allows the entire glass panel to convert from clear to opaque at the press of a button.

The automobiles are a proud showcase of Bentley's Mulliner division's master workmanship, and with the Mulsanne's production ending last year, it's fair to say these masterpieces will never be duplicated. To ensure stability, the one-meter longer variant is mounted on a re-engineered chassis with a unique suspension. 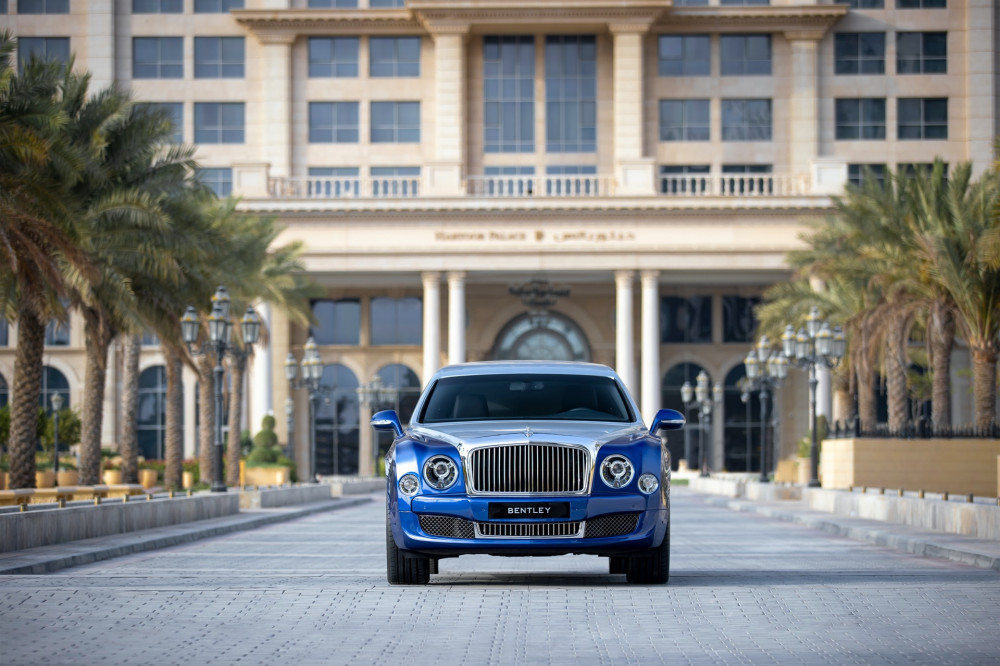 Mulsanne Grand Limousine is equipped with Bentley's legendary 6¾-litre twin-turbo V8 engine, which produces slightly over 505 hp (512 PS) and 1,020 Nm of torque (752 lb. ft). Each one of the 5 autos on display is unique not only from other cars on the road but also from one another, with its own set of design palettes and characteristics.

Each car rides on a set of 21-inch wheels that suit the exterior painting, and even the base iconic Flying "B" has the inscription "Coachbuilt by Mulliner" carved on it to compliment the distinctive designs.

Despite the numerous alterations made to improve the smaller Mulsanne on which it was based, the Grand Limousine preserves the design and lines of its predecessor. According to Bentley, this gives it the world's longest manufacturer-built limousine.