Bugatti specimens aren't priced that high for nothing, and because so few are sold each year, the manufacturer can keep track of all the items in the world, who they've been sold to, and what condition they're in. If a Bugatti Veyron, for example, is involved in an embarrassing incident like drowning in water, even the most astute owners won't be able to just restore it and resell it as a delightful automobile.

The story below is a funny and curious one and it took place in the US, spanning the last 12 years and only recently getting a denouement. A Bugatti Veyron, manufactured in 2006, was being driven in November 2009 by its then-owner, named Andy House. 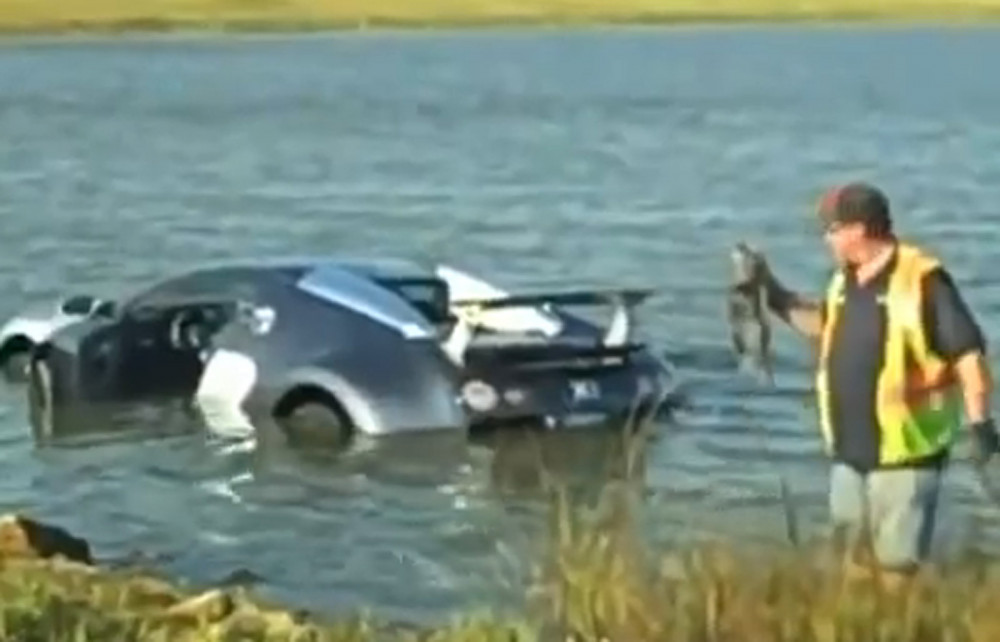 He was driving his Veyron on a trail along the shore of Galveston Bay in Texas when he inexplicably steered it straight into the sand and into the ocean. Someone filmed it, but in 2009 the videos were getting millions of views on YouTube slower, so the Bugatti owner went to his insurance company and claimed he'd ended up in the water trying to avoid a pelican, so he claimed the $2.2 million the Veyron was insured for. 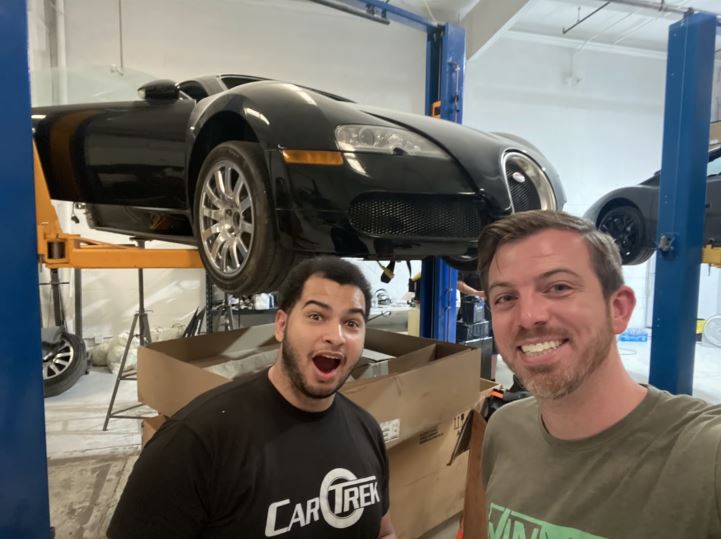 Before all this, Andy House was charged with insurance fraud and ended up spending 10 months in federal prison. After that incident, the car was taken to an appraisal shop, where it sat for a very long time almost forgotten. When he got out of prison, Andy House was the official owner of that Bugatti, which had not been officially involved in an accident, so his history was officially clean.

He sold it to an exotic car dealer, who was irrational enough to take out a $980k loan to buy the defective car and have the money to also repair it substantially, or revive it, rather. But the buyer soon went bankrupt and had just painted half the car white. After the bankruptcy, the bank took the defunct car. 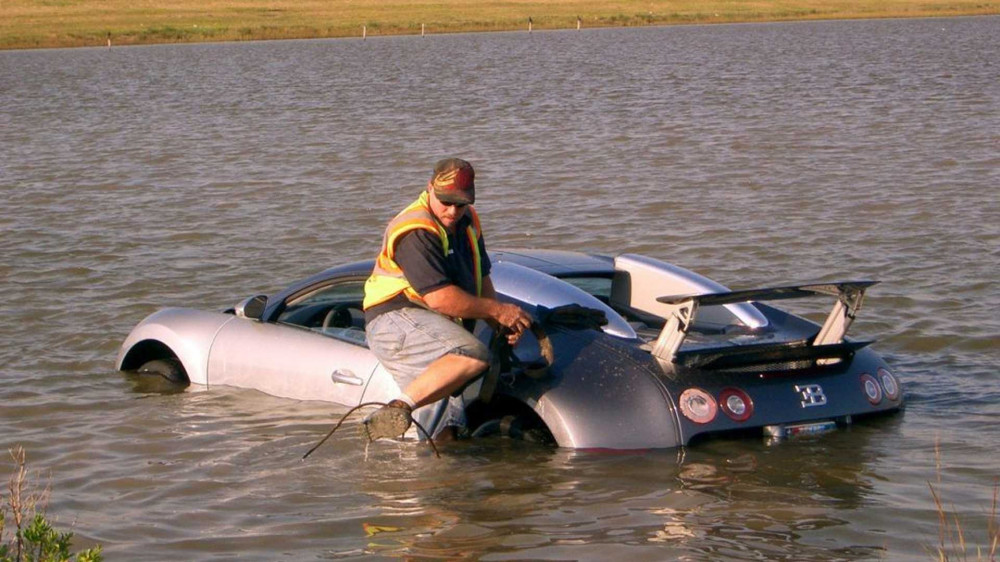 But all this time the Bugatti was sitting with the same mechanic, in the same workshop where it had been taken after the flood. And because the mechanic claimed to have $700,000 in unpaid bills from the previous owner, the bank decided to give him the car as it was, to get even.

That mechanic sold the car to a man in Texas who wanted to restore it, but here he was in for a surprise. Bugatti knew about the history of this car and made it clear to him that under no circumstances would he sell him wiring harnesses or any other parts to restore this car. 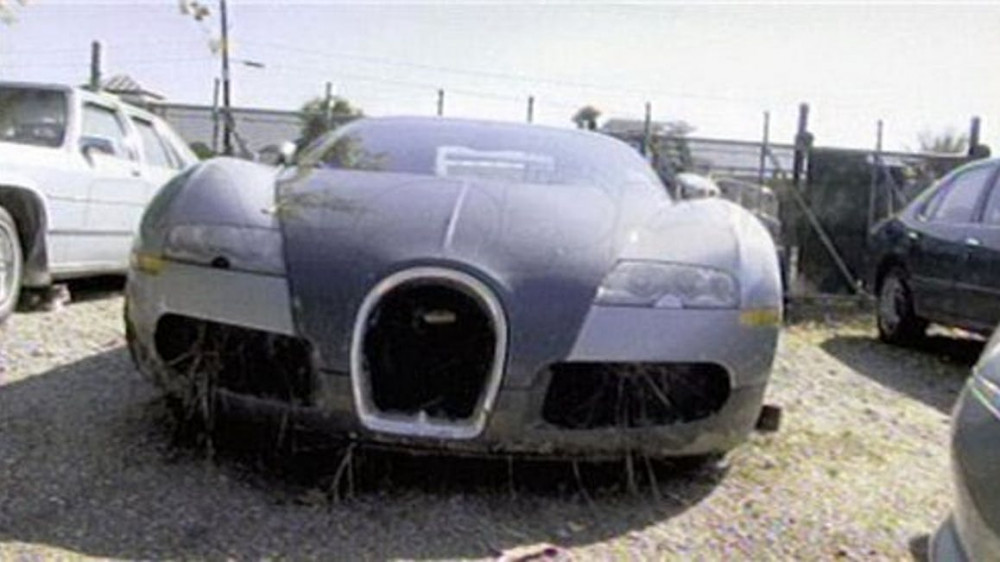 With its history, it must be destroyed and that's it. Bugatti did not want another buyer to ever come into possession of this Veyron and find out that the factory was in any way complicit in its restoration. Now that's factory attitude!
That led the Texan to beg the mechanic to get rid of that car, who then ended up begging the first owner to help him sell it, and finally, in 2019 the car ends up on display for sale for just $300k.

Apparently from then until 2020, the car had several more attempts to sell it, only to be bought in 2020 by an owner of several other Bugattis, who was also selling parts for them online. The wrecked Veyron had arrived in a horrible state - full of corrosion, with rusty turbines, and there are 4 of them, and the bodywork repainted black. In a word, it was a heap of wreckage. 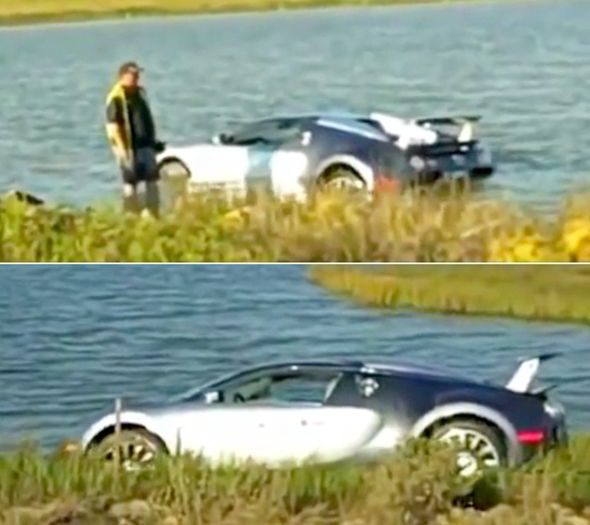 However, this owner of other Bugattis had a positive history at the factory and convinced them that he would restore the car for their own use and that that VIN code could be entered into a clear listing so that any prospective buyer would know the car's history. So Bugatti was persuaded to sell him parts, including the whole new wiring harness, which was impossible to get otherwise. 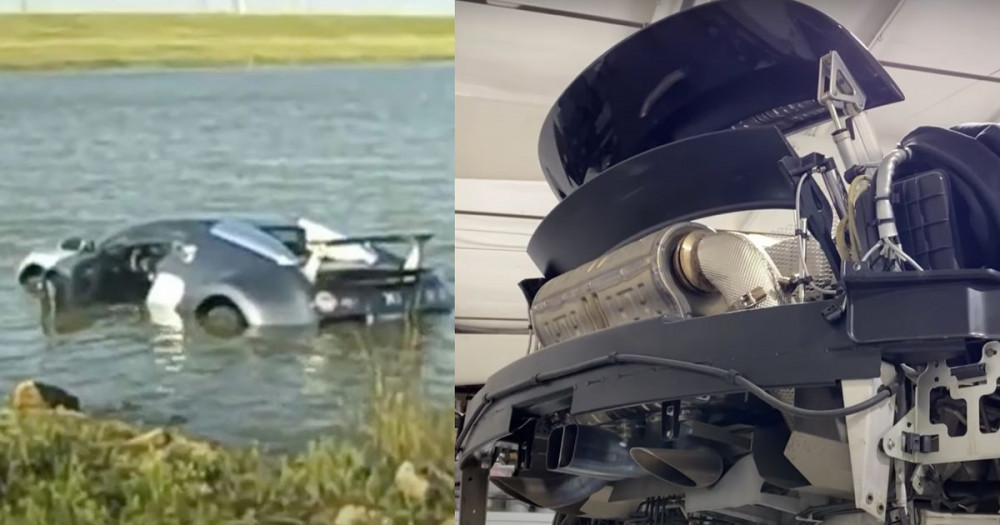 So this Bugatti drowned in 2009 is only now, in 2020-2021, experiencing its renaissance. But it's a stingingly expensive job, and it's hard to see whether its owner will ultimately consider the effort worth it. The Burmester audio system alone, which is fiber optic-based in the Veyron, costs $100k and needs to be replaced in its entirety because it's totally defective in the drowned copy. And then the tires cost $22k, a normal service costs about $20k, with oil and filter changes, and that's not counting major parts and work.