In the world of monster truck enthusiasts, one thing is for sure. Bigger is better. If you're going to develop a new monster, you're going to want it to be as big as possible! Is there a record for the heaviest working monster truck ever built? The answer can be found in the United States, their native land. Bob Chandler, a St. Louis native, built the monstrosity in 1986.

Indeed, its history is outstanding! While working as a construction worker, Bob took his company car, a Ford F-250 4x4, off-roading on the weekends.

When it came time to replace the components, he realized that they were subject to error and that spare parts were hard to come by.

So, he decided to start a firm that specializes in Ford detailing to solve the problem at hand. He and his associate were making money, so they spent their leisure time upgrading his pickup truck, ultimately turning it into a monster truck. Bob built bigger and bigger versions as time went on, using the new Ford pickups. Bigfoot 5 is the man's fifth try, and it's the one that won the title. 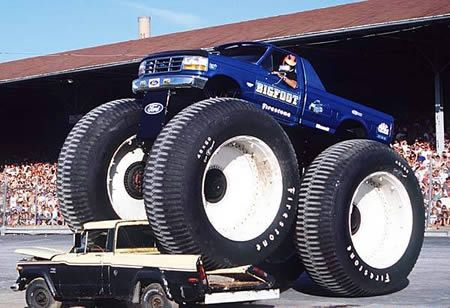 A 4.7-meter-tall monster that weighs 17,200 kg. Wheels from a US military vehicle in Alaska measure 3 meters in diameter. Even though the monster is still being used at many car events, it isn't the newest version of Bigfoot. A total of 21 units have been constructed so far.