As part of a quick and wide-ranging electrification effort, Lexus has promised to provide a dynamic driving experience in future models, and it will launch its new-era lineup in 2022 with its first designated electric car.

Following the UX 300e, the Japanese luxury brand's latest EV, previewed by the futuristic LF-Z Electrified concept, will be its second pure-electric model. It will also be the first Lexus to utilize Toyota's innovative e-TNGA architecture, which was developed in collaboration with Subaru. As a result, it will bring in a new era of Lexus design as well as a slew of innovative technical solutions that the company thinks will enable it to dramatically extend its sales footprint. 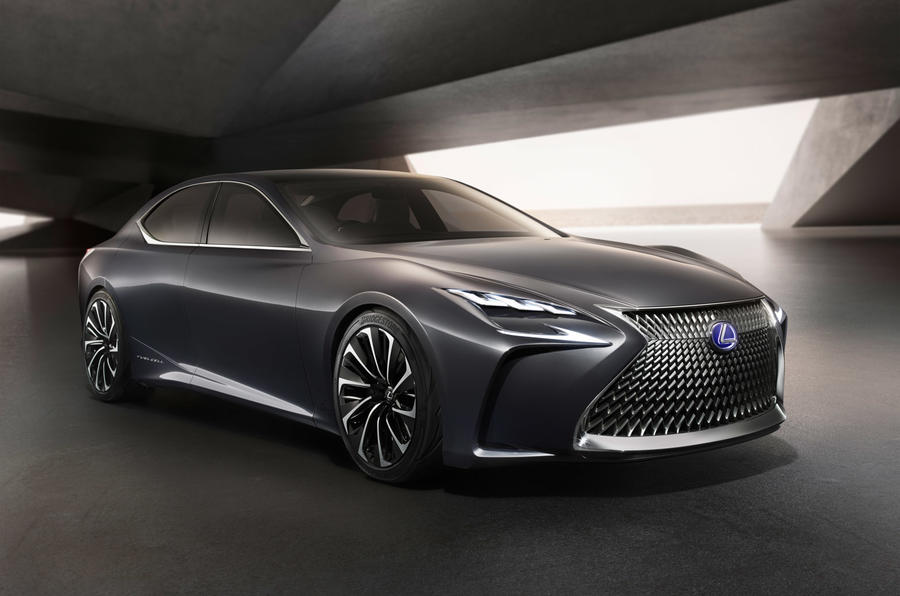 By 2025, Lexus plans to introduce ten new hybrid, plug-in hybrid, and pure-electric models, with electrified vehicles accounting for more than half of the company's global sales. The new, second-generation NX crossover, which will go on sale later this year, will play a key role in this approach, with its new 302bhp PHEV powertrain projected to match sales of the brand's already-popular full-hybrid model.

The new Lexus EV will be equal in size and positioning to the NX, but will have significant design and performance differences. The electric Lexus will be closely similar to the production version of Toyota's new bZ4X concept, while the existing combustion-fueled SUV shares its platform and powertrains with the Toyota RAV4. 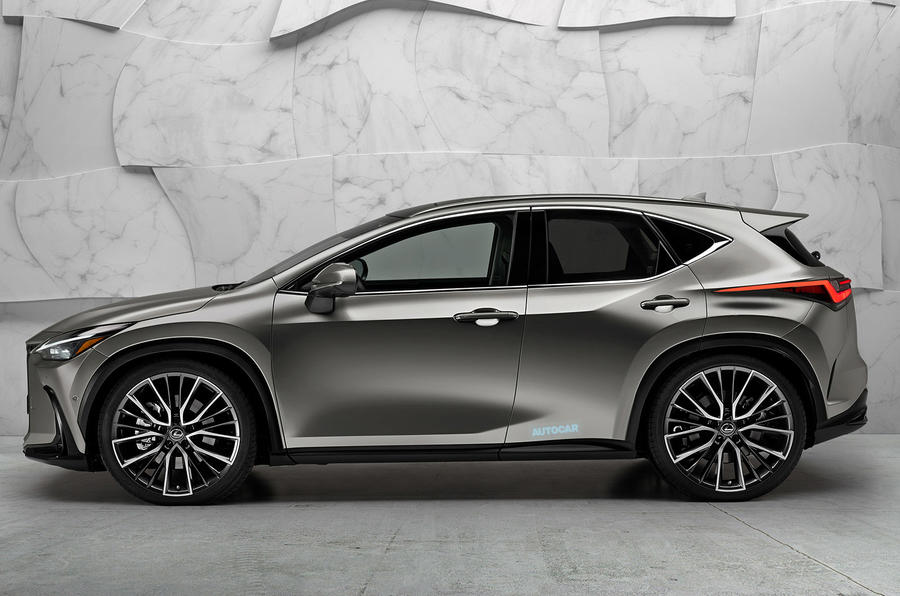 The e-TNGA technology used in Toyota's bZ line-up has already been confirmed for use in seven new Toyota-badged EVs by 2025, but Lexus is yet to reveal how many of its ten electrified cars would totally eliminate combustion.

Lexus's first pure EV would sit lower to the ground than its previous SUVs, notably the UX 300e, and assume a more obviously performance-oriented stance, as hinted by the LF-Z concept. A creative reimagination of the brand's distinctive "spindle" grille, thin, angular LED headlights, a wraparound rear light bar, and a new logo spelling the brand's name over the bootlid are among some of the design details revealed by the concept and expected to be pushed out to future Lexus EVs.

The concept's sleek, aerodynamically optimized design alludes to Lexus' increased focus on performance and dynamic agility, a notion backed by Pascal Ruch, vice-president of the brand's Europe value chain. “We will continue to emphasize the Lexus driving signature because we believe electrification and driving pleasure is not strictly exclusive,” stated Ruch. They can work well together.”

As a result, Lexus' electric SUV is expected to have straight-line speed comparable to the fastest electric SUVs. While the LF-Z concept had a 536bhp rear-mounted engine and a stated 3.0sec 0-62mph time, the production car is expected to have a 0-62mph time in the low-4sec range, similar to the Jaguar I-Pace. The 90kWh underfloor battery from the concept, which has a WLTP range of 373 miles and can charge at up to 150kW, is expected to be retained, though a smaller unit could be used for entry-level models.

The new SUV, like the LF-Z and bZ4X concepts, is slated to come standard with four-wheel drive and Lexus' new, completely variable Direct4 drivetrain system, which includes torque vectoring for improved cornering performance. It will be connected to a new steer-by-wire electronic steering system, which is supposed to encourage a more direct and engaging driving experience by removing the mechanical link between the steering wheel and the drive wheels. 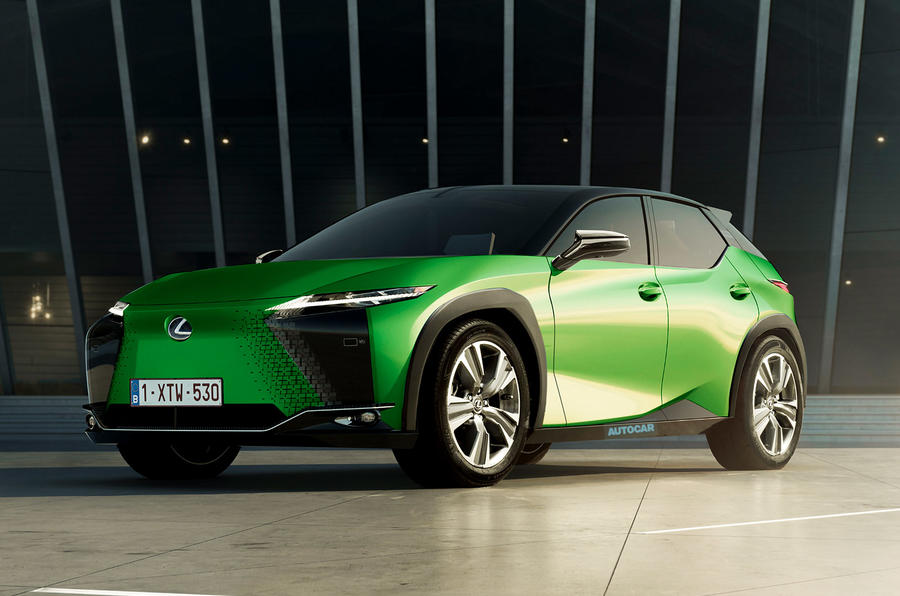 The dynamic theme will extend to the interior, with Lexus EVs adopting the brand's new "Tazuna" cockpit design concept. This is a new idea pioneered by the new NX, which focuses heavily on improving the driving experience. The EV family is projected to include large windows, a curved dashboard, and sports-style seats, with modern driver and navigation assistance aiming to deliver a high level of autonomous driving capability.

Lexus will need to significantly broaden its line-up as part of its image overhaul to get a stronger position in the luxury class, notably in Europe, where it hopes to acquire a 3% market share with six-figure annual sales. “We are covering the major sectors we want to cover,” Ruch told Autocar, “but of course we are always looking at what would make sense, or are there other ways to expand our line-up?”

He stated that Lexus is researching new model segments and hinted that a replacement for the CT 200h hatchback, which was discontinued in the UK last year after a decade on the market, is in the works. A new-generation hatchback would give Lexus a competitor to the popular Audi A3 and Mercedes-Benz A-Class, but Ruch stated that Lexus is "considering numerous ideas – nothing is decided," implying that the CT might be placed slightly in its 2nd gen.

Lexus with hydrogen fuel cell technology is a possibility.

Toyota, Lexus' parent company, is still devoted to developing hydrogen fuel cell technology as a viable alternative to battery electric vehicles and has just released the second version of its Mirai FCEV saloon. The Mirai has the same lengthened GA platform as Lexus' LC coupé and LS saloon, implying that the fuel cell technology could make its way into one of the premium brand's vehicles.

“Perhaps, one day, you will see a Lexus fuel cell,” Pascal Ruch stated. It's not out of the question.” He refused to say which market such a car would fit into and insisted that it "would have to be distinct" from the Mirai.

Lexus unveiled the elegant, hydrogen-fueled LF-FC saloon concept in 2016 as a preview of a production model that was set to debut by 2020. Toyota has lately stated that hydrogen will play a crucial role in the company's electrification shift.

Subaru Solterra: Subaru worked with Toyota on the development of the e-TNGA architecture, which will debut in 2022 with Subaru's new Solterra SUV. It will be positioned as a C-segment SUV of similar size to the ICE-powered Forester, and will likely feature front-, rear-, and four-wheel-drive configurations.

Toyota bZ4X: Angular, RAV4-inspired aesthetic cues and a spacious cabin will set Toyota's electric SUV apart from its Subaru and Lexus siblings, which was previewed by a near-ready concept earlier this year.