ArabGT has returned with another unusual build. It's based on the Toyota Land Cruiser, by the way. Because it's no longer an SUV, we're coping with a previous-generation LC200 with significant changes. The one-of-a-kind build, which has been transformed into a pickup truck, features a third axle and was created by Hussein Al Tamimi.

Hussein, who was born in Iraq, has a wealth of experience modifying cars, and his most recent effort will be followed by another using a Japanese donor vehicle. Meanwhile, he visited Dubai and talked to ArabGT about his wacky invention. However, the truck footage was shot in Basra, Iraq.

The additional wheels simply tag along with the usual 4x4 layout, so it's not a true 6x6 vehicle. To increase the truck's approach angle, Hussein cut the corners of the front bumper down. It has a winch, tow hooks, extra LED lights, and a large skid plate, among other off-road features.

A snorkel, front and rear fender flares, and a unique suspension arrangement for additional ground clearance were also added to the LC200 pickup. The taillights, too, have been updated. When you enter via the electrically retractable running boards, you'll see red leather almost everywhere, including the front and rear central armrests and the Rolls-Royce-inspired "Starlight" headlining. 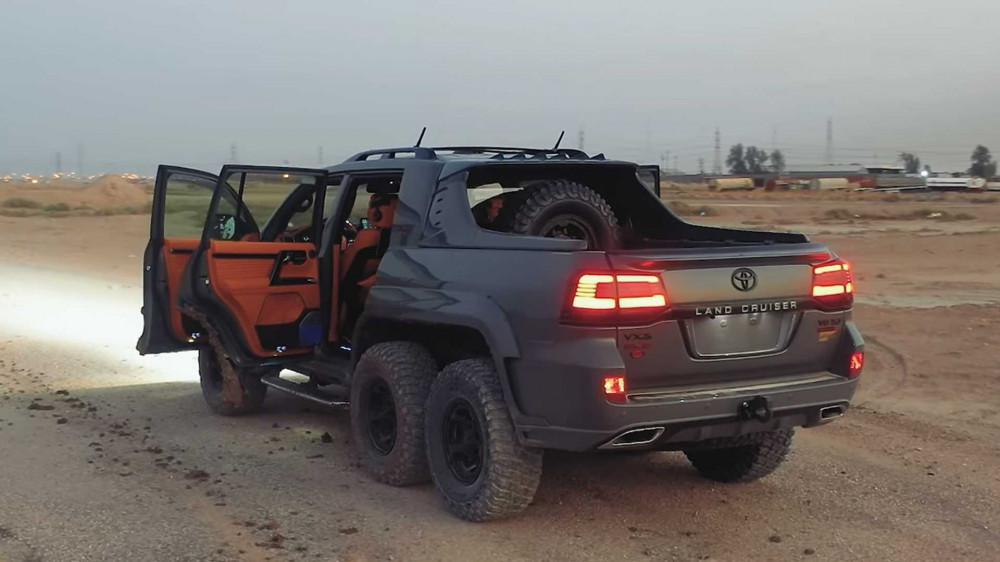 On the front passenger side of the dash, there's a screen, as well as two screens for the rear-seat entertainment unit. It also boasts soft-close doors and a tailgate with illuminated "Land Cruiser" writing, as well as a bespoke center console with a built-in display for the back seats. In the style of a race vehicle, Hussein changed the steering wheel to include a small screen in the center bordered by LEDs for the 5.7-liter V8's RPMs. We can only imagine the cost and effort involved in converting the Land Cruiser into a more sumptuous pickup truck.